Sawyer is the cobot with the face, developed by Rethink Robotics. It is the later brother of the 2-armed Baxter. Baxter has not been made since the acquisition by Rethink Robotics (in 2018). Baxter was one of the first cobots on the market and has meant a lot for research in human-robot communication. The Sawyer is a cobot with 7 axes, whereas most cobot brands make 6-axis robot arms. This makes the robot arm extra flexible and suitable for getting into hard-to-reach corners. The Sawyer also has an integrated vision system. This allows the Robot Positioning System (RPS) to monitor changes in the environment and to locate parts.

The Sawyer can be programmed, just like other cobots, via hand guidance. Programming via hand guidance is made easy by buttons on the head of the cobot, so that you can guide the robot arm with 2 hands. You then fine-tune the programming via Intera Studio, a graphical user interface, on a laptop. There, you also have more functionalities available. In addition, the platform offers Intera Insights. This allows you to display real-time production statistics, such as cycle times and number of picks on the screen of the Sawyer.

The Sawyer has a load capacity of 4 kg and a reach of 1260 mm. Compared to other cobots, the joints give more noise. That has to do with a different technology other cobots have. The joints work with a series of elastic actuators (SEAs). In a standard actuator, a motor drives a gearbox that rotates a joint in a robot arm. These three elements create stiffness that leads to speed and precision. In SEAs, the motor and gearbox drive a spring and it is the spring that drives the joint. The spring makes the actuator elastic, but also noisy. 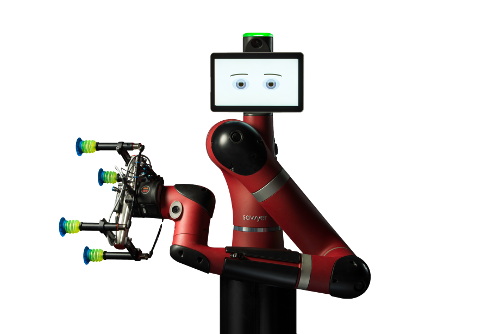